Modigliani is an artist whose work is instantly recognisable.  His distinctive paintings of ordinary people with elongated, thin faces hang in major art galleries around the world.

But less well-known is the personal story of this Italian artist who left Italy to live in Paris to pursue his dreams. The joy of the Tate Modern’s new Modigliani exhibition is that it throws fresh light on the artist’s life and work.

The show’s star turn is a stunning virtual reality installation which lets you explore Modigliani’s rooftop studio in Paris. It’s almost as good as being there back in 1919!

Before heading to the virtual reality tour, the show takes us through the early life of Modigliani. There’s a lovely self-portrait of the artist as the clown Pierrot, a popular character of the time, and a portrait of fellow artist, Brancusi, which is reminiscent of Picasso’s Blue Period style.

Modigliani left his native Italy to work in France in 1906 at the age of 21. He turned his back on a country full of the world’s richest art treasures because he was attracted by the excitement and bright lights of Paris, the major hub of the artistic universe in the early 20th Century.

Once there, he encountered new ways of thinking and seeing art which were to shape his own work. Inspired by artists like Cezanne and Picasso, he started to carve his own niche as he mixed in avant-garde circles. 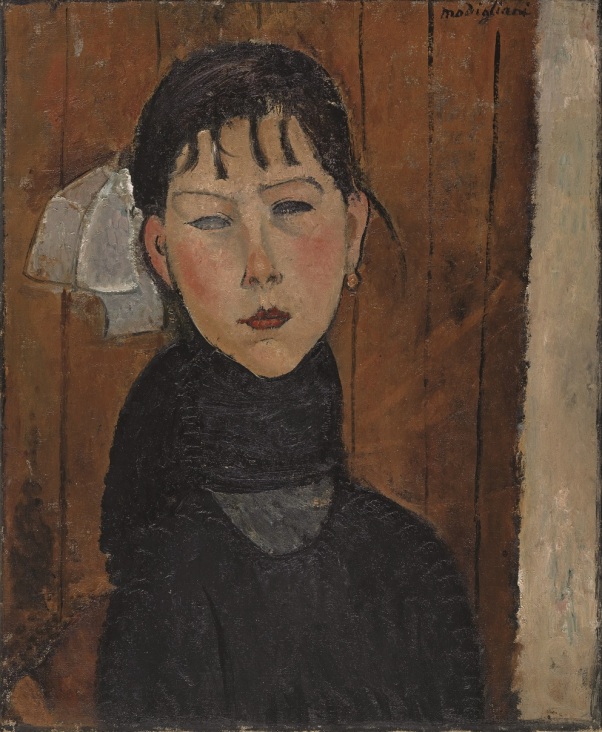 Loose brushstrokes and bright colours leap out from his Paris works as Modigliani abandons his earlier polished, traditional style of painting.

The paintings look like ‘still lives’ of people – there is an incredible stillness and lack of movement in these character studies.

The paintings are also flooded with light… and the people appear to have come straight off the streets of the bohemian district of Montmartre where Modigliani lived.

“My Italian eyes cannot get used to the light of Paris,” said Modigliani. “Such an all-embracing light… You cannot imagine what new themes I have thought up in violet, deep orange and ochre”.

Montmartre’s famous cafes, cabarets and bars became part of the artist’s lifestyle. His expressive portraits of fellow artists and musicians drew on the radical new style of Cubism but never developed into full-blown abstraction.

Ordinary people are central to Modigliani’s work and this is what makes his paintings in the Tate Modern show so compelling.

Later in his career, he worked for a time in the French Riviera because of his health problems. Again, the warm light of the area fills his works with warm, Mediterranean colours – as seen in his landscape paintings of Cagnes.

Modigliani created some of his strongest works whilst living in Nice, working quickly and instinctively, capturing the lives of normal people. Friends describe him painting in a minimalistic style, with a brush held like a violinist with a bow.

These works have strong echoes of his great predecessor, Cezanne, also known for his Provencal paintings of landscapes, still lives and peasant folk.

In Paris, Modigliani began to paint female nudes, something that had proved difficult for him in more prudish Italy where he was woefully short of willing models. It was in Paris that Modigliani also found his spiritual home. 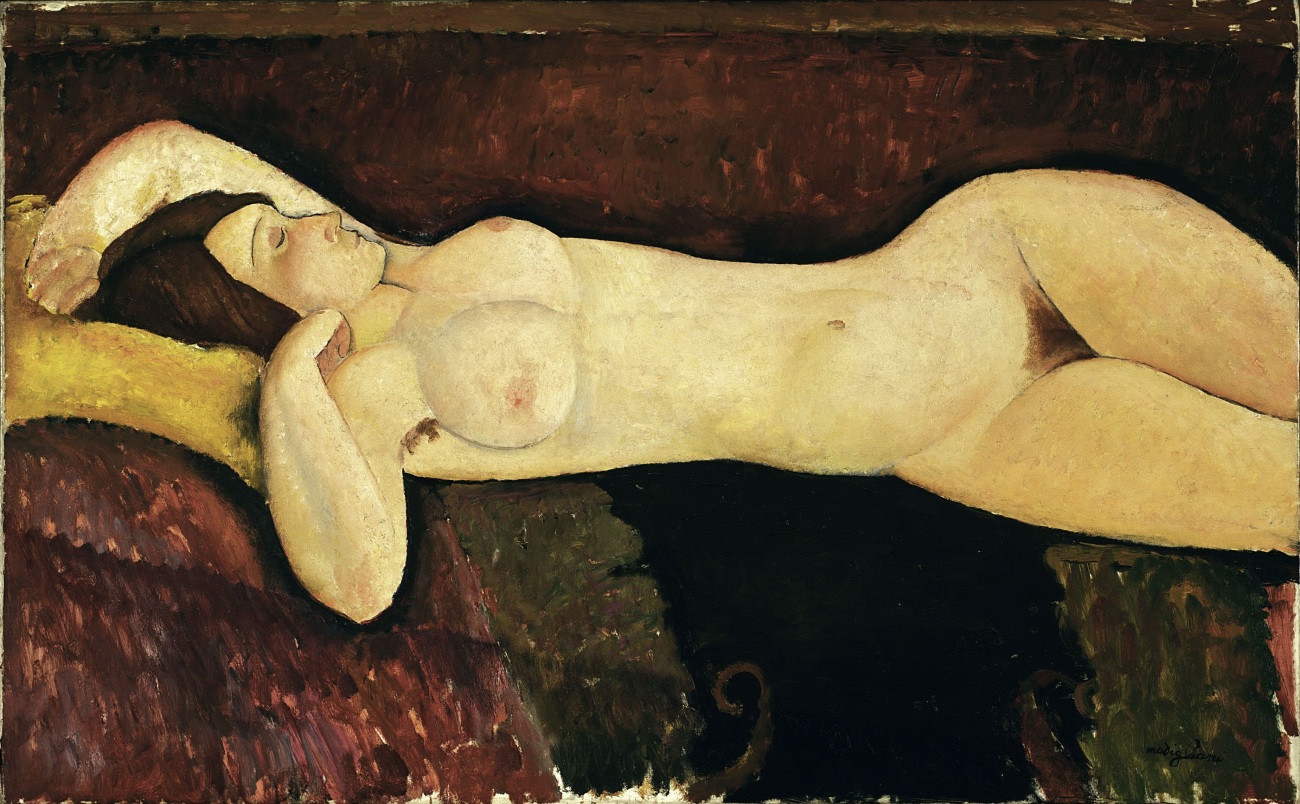 There’s an impressive selection of 10 of Modigliani’s stylised nudes which cover the walls of a whole gallery. He painted them in 1916 and 1917 for a number of male buyers. They were the naked pin-ups of their day.

Today, I feel a little uneasy about them, given their passive poses and in the light of recent debates about the objectification of women. OK, art has long depicted female nudes… I just wish Modigliani could have painted a series of male figures too if he was keen to display the beauty of the human body!

His modern nudes series was driven by money and the art market. Rich clients wanted them to ogle at on their walls – they were female fantasies.

Some critics (largely male) argue that the nude models were independent young women who “dominate the compositions, making eye contact with the viewer”.

But their passive poses also suggest that they were doing this modelling for the money, not the desire to be independent and radical spirits. Modigliani’s professional models earned around five francs per sitting, twice the average wage of a female factory worker during World War One.

Make up your own mind about them!

Although most people think of Modigliani as a painter, it’s less well-known that he was also a sculptor.

The Tate Modern show does a good job of showcasing these lesser-known works and demonstrating how important sculpture was in his evolution as an artist.

Modigliani enjoyed visiting Paris’ museums and galleries where he drew inspiration from works he saw in the Louvre and the Ethnography Museum at the Trocadero.

His sculptures show the influence of these collections with their African style heads which remind me of Egyptian and middle eastern women in ancient art. 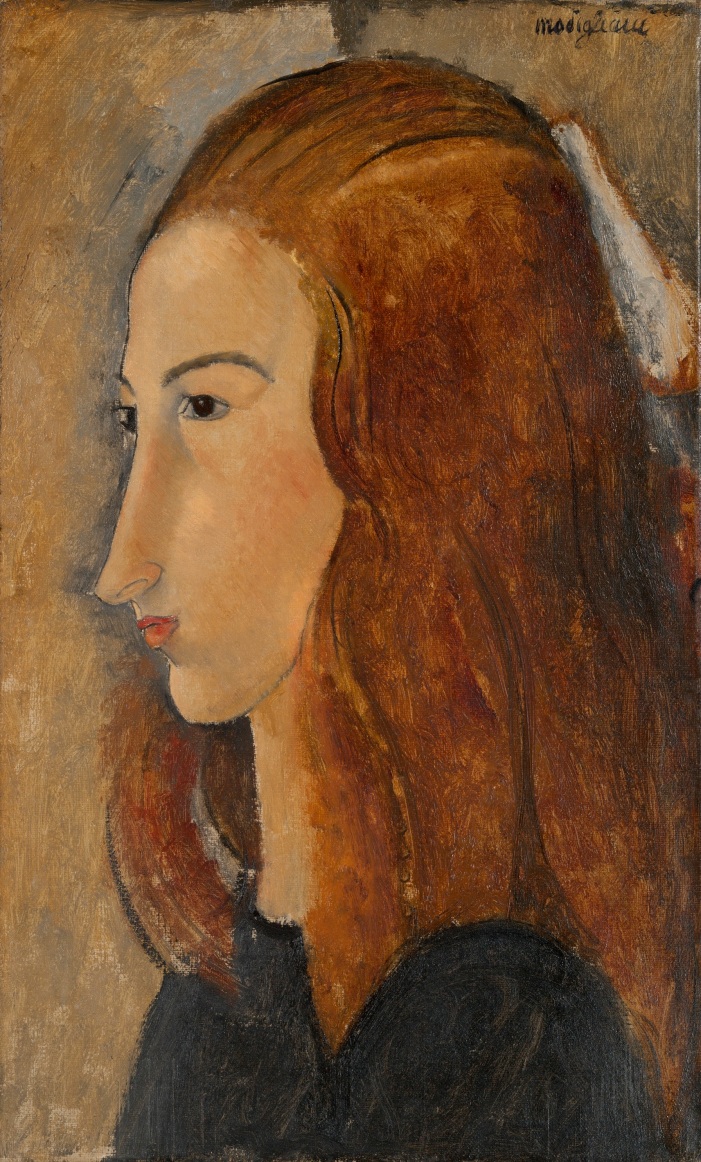 You can see how they were to influence Modigliani’s paintings and the characters in his portraits with their elongated faces, almond eyes, swan-like necks and strong features.

His sculptures are beautiful works in their own right but Modigliani was forced to abandon sculpture despite its successful reception at the Salon d’Automne show held in Paris in 1912.

Modigliani was already suffering from the after-effects of childhood TB and dust from the carving work exacerbated his breathing problems. 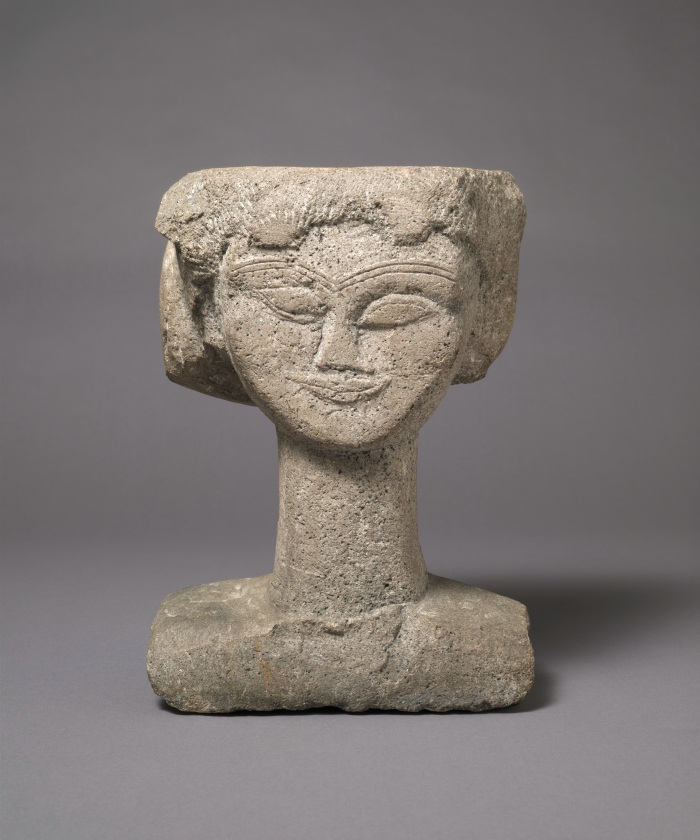 Sculpture was also more expensive than painting, even though Modigliani tried to source his materials cheaply from local limestone quarries.

It’s a shame that he had to give up sculpting but many of the lessons he learned from sculpture became part of his new style of painting and helped to revolutionise his art.

Although Modigliani became part of the Parisian art community, there’s a strong sense that he was always something of an outsider.  This may explain why his art looks so distinctive and isn’t easily confused with other painters of the time.

Portraiture was relatively unfashionable in the early 1900s which may have set him apart from the abstract painters of that period.

Modigliani came from a family of wealthy Sephardic Jews which may also explain why he saw himself on the edge of the art world. Anti-Semitism was common in France so it’s likely that he would have faced prejudice from some quarters.

In 1919 Modigliani returned to Paris from southern France when his health improved. With the help of his art dealer and friend, Leopold Zborowski, he found a modest studio on the Rue de la Chaumiere near Montparnasse.

Working in the new studio was one of the happiness times of his life.  Today, thanks to meticulous study of records and photographs, the ‘Ochre Atelier’ has been recreated in its authentic glory.

For me, this is the highlight of the Tate’s Modigliani show.  Step inside the waiting area and the staff will kit you out with a VR headset.

After a few adjustments to straps and sizes (I have a small head!), you’re ready to enter the world of Modigliani.

At first, it’s slightly weird being transported to Paris even your mind knows only too well that you’re sitting in an art gallery in London.

But as you get used to the virtual world, you start getting immersed in Modigliani’s studio experience.

A cigarette lies on a makeshift ash tray puffing out smoke. Peer to your left and you can see the rooftops through the open window. Lean one way or another and you get different views of the studio, complete with moving images.

By the end, I felt that I’d been transplanted to the small space where Modigliani laboured on his final paintings.

As I looked around the final gallery displays, I felt a real sadness that Modigliani died in 1920 from tubercular meningitis at the age of 35 – before he could realise the full extent if his artistic dreams.

The final tragic footnote to the exhibition tells how his fiancée, Jeanne Hebuterne, who was expecting his second child, took her own life days later.

The portraits of Jeanne by Modigliani take on an incredible sadness when you read what happened.

Despite the tragedy of their early deaths, this is an uplifting show which succeeds in immersing you in the fascinating world of one of Europe’s most distinctive artists.

This surprising show is one of the big hits of the London art season… you won’t be disappointed by this unique, interactive experience. Modigliani’s art is brought to life like never before.

Modigliani is at the Tate Modern in London between 23 November 2017 and 2 April 2018. There’s an admission charge for this special show.

Book ahead if you’re keen to see the ‘Ochre Atelier’ studio or you’ll end up waiting in a very long queue. Spaces are  limited so tickets are available on a first come, first served basis.

The nearest public transport to the Tate Modern is the RV1 bus from Covent Garden to Tate Modern.

Creepy Places to Visit in Paris

Things you should know about driving in Switzerland